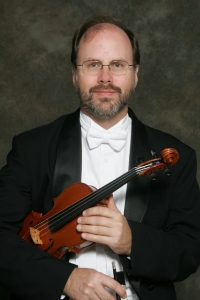 Christopher Chappell is the acting principal second violinist in the Jacksonville Symphony Orchestra (JSO), has played in the JSO since 1990, and is a founder of Prelude Chamber Music.

Chris is from Rochester, New York, where he began playing violin at age six in the first grade. He has a Bachelor’s degree in Applied Music from the Eastman School of Music and a Master’s degree in Violin Performance from Indiana University.

Before coming to Jacksonville, Chris was associate concertmaster of Savannah Symphony, and acting concertmaster for the Yamagata Symphony in Japan. He has performed as soloist with each of these orchestras. Chris can be heard performing in various chamber groups here in Jacksonville as well.

Chris comments that “a live performance of a great symphonic work is a reflection of the glory of God’s order and balance in Creation; the unfolding of history in time and space.” Chris adds that his personal faith in Jesus Christ is central to how he lives life and he enjoys tennis, cycling and “getting out into nature” on foot or in a canoe.